Leading figures from world football’s governing body, arriving in Doha a week before the beginning of the tournament, had been expecting to check in to the opulent Fairmont hotel located in the spectacular waterside Katara Towers.

But a few days before their arrival, embarrassed local officials had to confess their accommodation wasn’t quite ready and they would temporarily be moved to the Chedi Katara resort instead.

Though the alternative hotel was similarly luxurious, the New York Times reported it was a ‘dry’ hotel that didn’t serve alcohol, meaning the champagne could not flow in the exclusive FIFA Club.

The Daily Telegraph said the Fairmont finally opened its doors to the FIFA guests on Thursday but it still provided discomfort for the Qatar Supreme Committee, who have had almost 12 years to ensure everything is ready on time.

The Qatar Supreme Committee and FIFA declined to comment on the embarrassing situation to the New York Times.

The FIFA delegates were instead accommodated here – the equally luxurious Chedi Katara – for the first few night of their stay. Unfortunately, it was a ‘dry’ hotel that didn’t serve alcohol

The Fairmont Doha, located within the eye-catching Katara Towers and overlooking the Arabian Gulf, ‘seamlessly blends elegant contemporary design with elements inspired by the region’s centuries-old cultural heritage,’ according to its website.

It boasts 362 luxury rooms, seven restaurants and bars, a spa and butler service. An upgrade to Fairmont Gold grants access to an ‘ultra-exclusive’ lounge and a private outdoor swimming pool.

It’s interiors were inspired by superyachts and it apparently has one of the world’s biggest chandeliers.

The Chedi Katara Hotel and Resort is situated on the beachfront and combines 59 elegant rooms with 32 villas.

Its website blurb said the hotel ‘elegantly blends the most exquisite elements of two magnificent cultures – Mughal and Ottoman’ and pays ‘meticulous attention to the smallest details, ensuring this modern-day palace offers our guests an unrivalled experience.’ 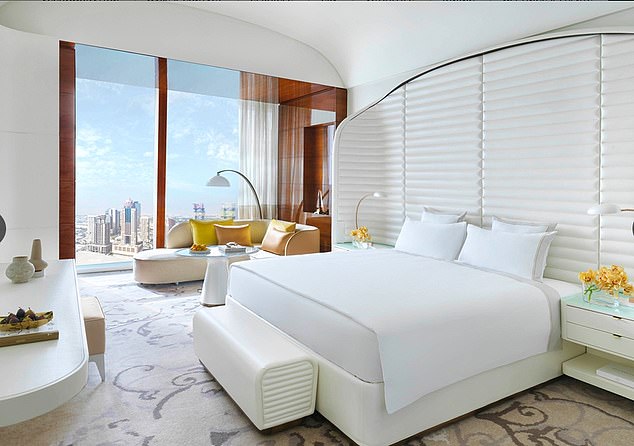 One of the rooms at the Fairmont, a luxury five-star hotel that has just opened in Doha 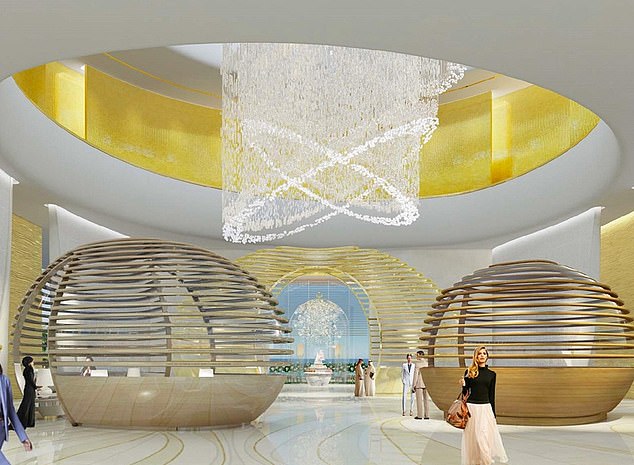 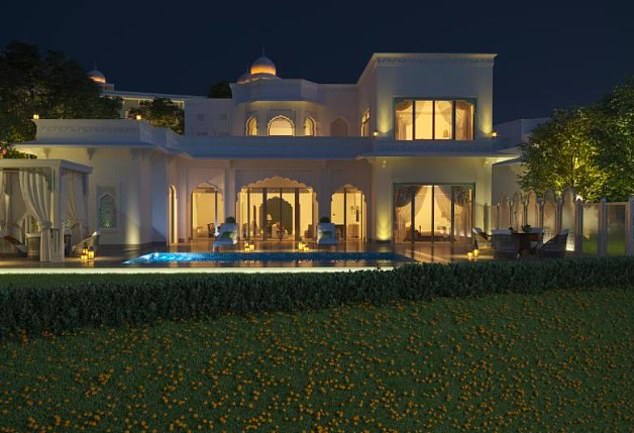 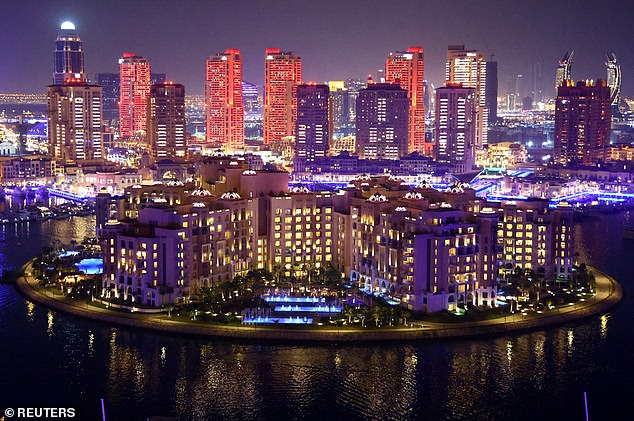 The Supreme Committee was responsible for providing not only the eight stadiums that will host the 64 matches of the tournament but also training bases for each of the 32 teams.

In addition, thousands of rooms of hotel accommodation are needed for fans, sponsors and media visiting Qatar for the tournament, which gets underway on Sunday.

The visiting officials will have use of the exclusive FIFA Club during the World Cup, a private area featuring unlimited supplies of fine food and drinks – but only when they get into their intended hotel as the temporary one doesn’t have these facilities.

It comes as the Qatari royal family are pressuring FIFA into a total ban on selling alcohol at the World Cup stadiums – just two days before the big kick-off. 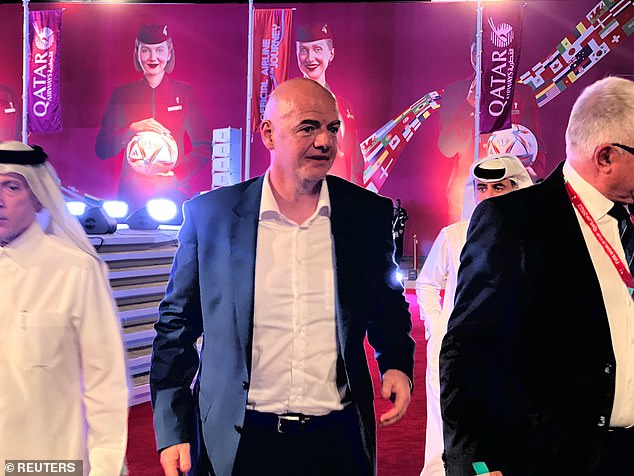 In Qatar, an Islamic nation, alcohol sales are typically restricted to foreigners drinking in licensed hotels and restaurants, or non-muslin residents with special permits for their homes.

If the U-turn goes ahead, it will mean Budweiser – one of the World Cup’s most prominent sponsors – will be unable to sell its beer to fans at games and could lead to legal action.

The New York Times said the intervention was made by Sheikh Jassim bin Hamad bin Khalifa al-Thani, the brother of Qatar’s ruler.

As things stands, fans can buy alcohol in hotels and restaurants, in fan zone at certain times and on stadiums concourses – but not inside. 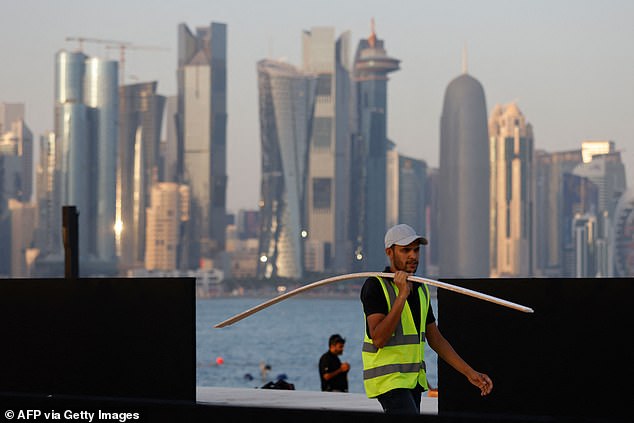 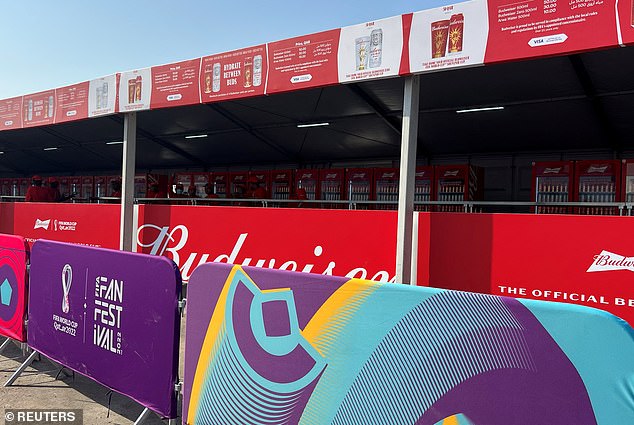 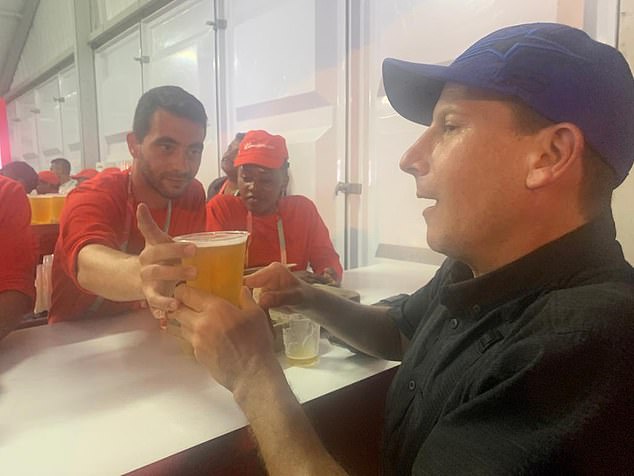 It will be costly, however, with a pint of Budweiser costing almost £12 at official venues, with fans limited to four drinks to stop drunkenness.

Qatar has already come under severe scrutiny over its treatment of migrant workers – mainly from the Asian subcontinent – during the construction of the World Cup stadiums and infrastructure.

A report by the Guardian last year said 6,500 workers had died in Qatar since the country was awarded the World Cup in December 2010.

Meanwhile, Gianni Infantino is set to win a new term as FIFA President after securing the backing of 200 out of the governing body’s 209 member associations, having stood unopposed in the leadership race.