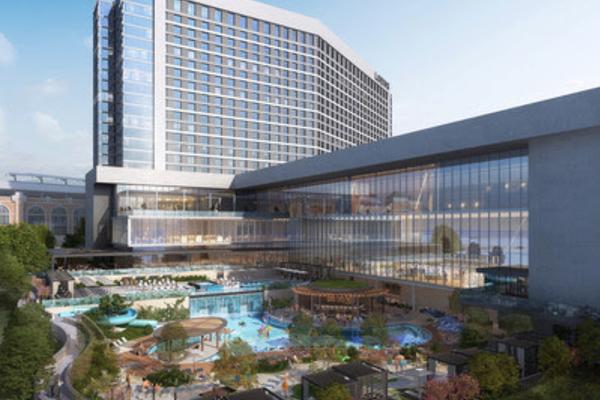 WHY IT RATES: This latest hotel development is set to become one of the coolest hotel and event spaces in Arlington, Texas. – Lacey Pfalz, Associate Writer, TravelPulse

Loews Hotels & Co, a wholly owned subsidiary of Loews Corporation (NYSE: L), has officially broken ground on the new $550 million Loews Arlington Hotel and Convention Center. Executives from the company were joined by Arlington Mayor Jim Ross, former Mayor Jeff Williams, Chairman & Managing Partner of the Texas Rangers Ray Davis, The Cordish Companies’ Director of Communications, Cari Furman, along with members of the Arlington City Council and other community and business leaders, to recognize and celebrate this milestone.

The addition of the Loews Arlington Hotel and Convention Center, a full-service resort, will further strengthen Arlington’s robust convention and tourism opportunities. The city is one of the premier sports and entertainment destinations in the United States, and a leading destination for meetings, events and leisure travel.

“Loews Arlington Hotel and Convention Center will allow us to capitalize on what we do best – combine a unique meetings and events destination with a best-in-class leisure resort,” said Jonathan Tisch, Chairman & CEO, Loews Hotels & Co. “This significant investment further underscores our confidence and commitment not only in the great City of Arlington, Texas but also in the strength of the travel and tourism industry and our belief in the recovery of post-pandemic travel.”

This property will be the second Arlington hotel for the hospitality company. Loews Arlington Hotel and Convention Center is scheduled to open in early 2024. This new hotel will be located across from Live! by Loews, which is a joint venture among Loews Hotels & Co, the Texas Rangers and The Cordish Companies, built on the former Texas Rangers’ Lot J parking lot.

“Arlington has some of the best built-in demand generators in the country, such as AT&T Stadium and Globe-Life Field. These attractions, coupled with Loews Hotels’ track record of offering distinctive experiences alongside operational excellence, will help establish the Loews Arlington Hotel and Convention Center as a centerpiece in The American Dream City,” said Alex Tisch, President, Loews Hotels & Co. “Our goal is for Arlington, Texas to stand alongside Las Vegas and Orland as one of the preeminent family, sports and entertainment destinations in America.”

This new project marks the first time that Loews Hotels & Co is acting as the developer as well as the owner and branded operator. The nearly $550 million project is financed with Loews Hotels & Co capital and a $300 million loan from MetLife Investment Management.

“Arlington continues to build on our incredible economic momentum, and today’s groundbreaking is another exciting example of our commitment to job creation and providing world-class amenities to our residents and visitors,” said Arlington Mayor Jim Ross. “Loews Hotels & Co is a best-in-class hotel brand and with innovative partners like Loews Hotels & Co, the Tisch Family, the Texas Rangers and The Cordish Companies, we’re able to further establish The American Dream City as a premier destination for visitors around the globe.”

– 888 guestrooms and suites
– 200,000 square feet of indoor meeting space
– 66,000 square feet of outdoor space, including an oversized event lawn
– Five food and beverage outlets, including a three-meal indoor/outdoor restaurant featuring two wood-fire pizza ovens and homemade pasta made on-site and a soon-to-be-named third-party restaurant from a well-known restaurateur
– 1,550-space parking garage
– Resort-style beach club with two pools, man-made beach, cabanas, fire pits and water slide
– The Arlington Convention Center, also operated by Loews Hotels & Co, will be located within the hotel
– Situated between Globe Life Field and AT&T Stadium, Loews Arlington Hotel and Convention Center will be accessible to the 300-room Live! by Loews via a Sky Bridge. The two hotels combined will offer nearly 1,200 guestrooms and more than 300,000 square feet of meeting and event space.

“The addition of the Loews Arlington Hotel and the Arlington Convention Center bring the development of the Arlington Entertainment District to another whole level,” said Texas Rangers Chairman and Managing Partner Ray Davis. “The existing world-class sports and entertainment venues will now be complimented by incredible hotel and meeting facilities that will attract national and international events of all kinds. I want to thank our partners, the City of Arlington, Loews Hotels & Co, and The Cordish Companies for sharing our vision that has become a spectacular reality in a few short years.”

Loews Arlington Hotel and Convention Center is part of phase two of the development of Arlington’s Entertainment District. Continuing their public-private partnership with the City of Arlington, Loews Hotels & Co, The Texas Rangers and The Cordish Companies are building upon the momentum and success of Texas Live!, Live! by Loews, and the Rangers’ new Globe Life Field. Additional features of the new expansion include a mixed-use residential building and a Spark coworking space, both developed by The Cordish Companies.

“It is an honor for The Cordish Companies to continue our partnership with the Texas Rangers, Loews Hotels & Co and the City of Arlington to deliver a transformative project for Arlington,” said Blake Cordish, Principal of The Cordish Companies. “Loews is one of the preeminent hoteliers in North America and a leader in the convention and meetings industry. The groundbreaking of the new Loews Arlington Hotel and Arlington Convention Center is an important next step in our commitment to create a world-class, mixed-use development that will cement Arlington as one of the leading premier sports, entertainment, culture, hospitality and tourism destinations in the country.”

Loews Hotels & Co is working with HKS as the architect and Looney & Associates on the interior design for this new development. Loews Arlington Hotel and Convention Center is being built by JE Dunn, who recently built the Loews Kansas City Hotel, which opened in June 2020. Arlington’s Con-Real is also involved in the construction of the project.