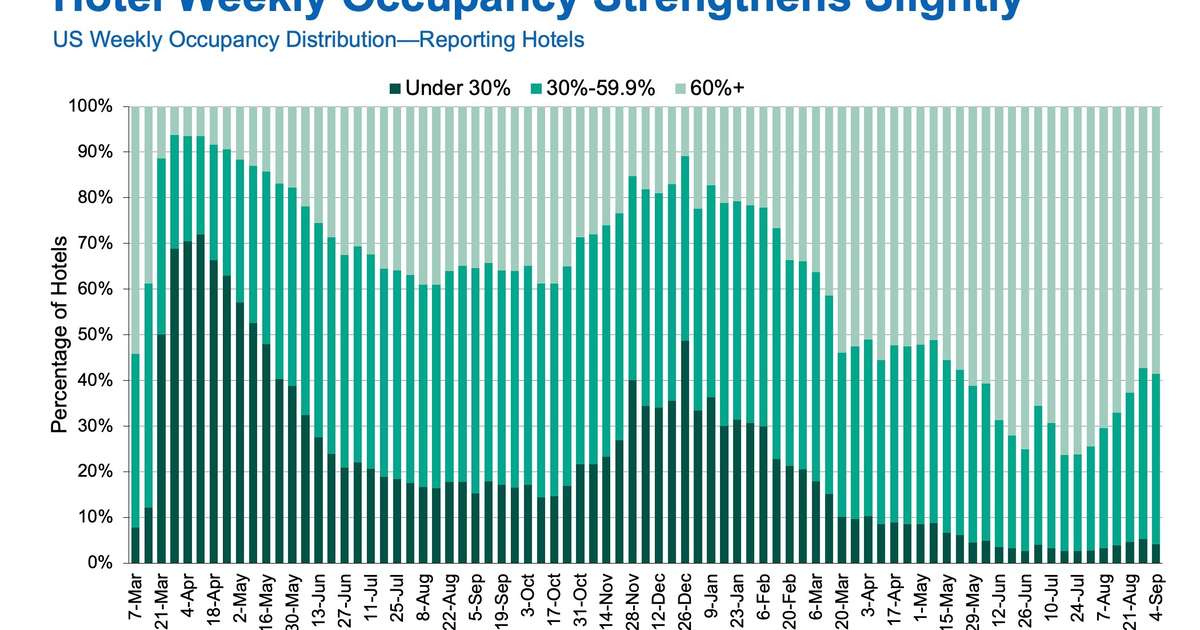 After declining for the past five weeks, weekly U.S. hotel occupancy inched up 30 basis points for the week ending Sept. 4 to 61.3%, according to the latest data from CoStar hospitality analytics firm STR. Weekend occupancy, Friday and Saturday, increased to 77%, which was the country’s highest since the first week of August.

Compared with Labor Day weekend in 2019, which was a week earlier, occupancy was nearly the same, indicating the desire to travel remains strong despite the increase in COVID-19 cases, and occupancy declines over the past several weeks are more due to the return of in-person schools and the slow materialization of business and group travel.

Labor Day weekend demand increased the most in Texas, followed by Florida and California. In total, all but eight states reported demand gains during the weekend with total U.S. demand 2% higher during the first two days of this year’s Labor Day weekend than in 2019.

While the weekend was strong, weekday demand fell for a sixth consecutive week, this time by more than 4% week over week. This is normal ahead of a holiday weekend. In 2019, weekday demand ahead of the Labor Day holiday fell by more than 8%. The difference is Hurricane Ida, which raised demand in Gulf Coast locations during the week, mitigating the pre-holiday drop.

Weekday demand declined in 83% of U.S. markets, but evacuations due to Hurricane Ida bolstered demand and occupancy in 10 markets. Mobile, Alabama; Jackson, Mississippi; and Louisiana North all reported weekday total-room-inventory occupancy levels above 75%. Strong weekday occupancy was also recorded in the Florida Panhandle, Alabama South, Mississippi, Houston, Texas East, Louisiana South and Birmingham markets, where weekday total-room-inventory occupancy was in the mid-60% and higher. Weekday hotel occupancy increased by more than 20 percentage points week over week in seven of the 10 markets affected by Hurricane Ida.

According to STR’s Market Recovery Monitor, total-room-inventory revenue per available room was 93% of what it was for the same week in 2019, indexing 0.3% higher than the previous week.