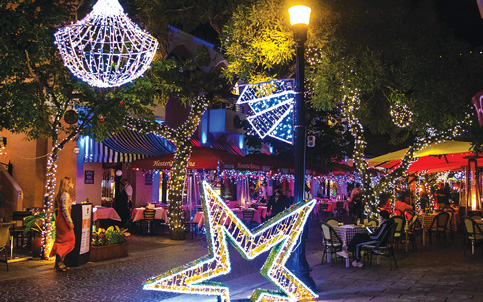 The Greater Miami Convention & Visitors Bureau is hoping to spread a little Holiday Magic with its latest campaign aimed at boosting local hotels and businesses, which Chief Operating Officer Rolando Aedo said are bouncing back slowly from the shutdown.

“Holiday Magic in Miami” is the bureau’s latest addition to its Miami Shines platform, which was started during the pandemic to show off the facets of the county’s tourism industry. The bureau has about 12 recovery efforts, Mr. Aedo said, including the outdoor adventure-focused Miamiland and more.

The new initiative, he said, was born out of a conversation with hoteliers who went above and beyond with holiday decorations and deals after Art Basel was canceled. The campaign, he said, highlights over 50 deals and destinations from hotels and attractions and is aimed at both visitors and locals. Hopefully, he said, the lights and decorations in lobbies along with appealing discounts will draw people in to patronize hotel restaurants.

With vaccines rolling out, Mr. Aedo said, it’s a matter of time before hotels start seeing normal volumes of guests. But becoming profitable, he said, could take over two years.

“We want to get people back,” he said. “That starts building occupancy. You want to restore the demand, and then you can start increasing the pricing.”

“This is a very resilient industry,” he said, noting that the 2008 crash had a similar result and that regaining profitability for hotels could be expected to take from two to four years.

A significant amount of lost travel, he said, can be attributed to cancellations of large-scale events and conventions, which have all but disappeared due to the virus. Nearly all travel now, he said, is strictly personal, and the return of corporate events in late 2021 will help to close the gap.

The Orange Bowl and College Football National Championship taking place Jan. 2 and 11, he added, will put some heads in beds and on a larger scale serve as an infomercial for the county as a whole.

“It’s less about the number of people that are coming,” he said, “than it is about the exposure that the destination will get. And that, coupled with the programs we have in place, gives us cautious optimism. Our strategy is to generate enough sustainable business in that first quarter and second quarter that the hotels can sustain themselves as the momentum starts picking up on the back half of that year.”

The Miami Beach Convention Center has also secured its first major booking for next year, the annual meeting of the American Society for Aesthetic Plastic Surgeons from April 30 to May 3, which will generate an estimated economic impact of $2.4 million. Discussions with the planners of similar events, Mr. Aedo said, are underway.

The bureau’s next marketing efforts, he added, will likely be collaborations with partners such as Expedia to roll out in the coming weeks now that standalone campaigns like Miami Shines are up and running. While the bureau has historically worked on such efforts, he said, they were put on hold during the pandemic.

Mr. Aedo said the marketing efforts, whether Holiday Magic or Miamiland, were as much for locals as anyone else. “We like to remind our locals to consider their backyard when planning a vacation,” he said. “We have an amazing destination, we have amazing hotels, amazing parks and amazing restaurants.”

One killed in hotel roof collapse in York | Latest News